•UNISEX MOST WOMEN ORDER DOWN 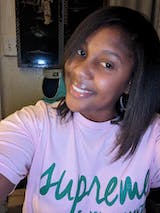 This review is not for the item shown however the details of this occurrence is inaccurate. Customer was not told that she only ordered one thing but was specifically told her order did not contain multiple sweatshirts. In a subsequent email informed her that her order was for a t-shirt and sweatshirt. This information was given prior to shipping. The price she paid also reflects a t-shirt not a sweatshirt which would have been 39.99. Production lists are not created using pictures but using the data shown on the order confirmation that provides us with the size and garment style that we would not know if the order was filled just based on the picture. The listing featured a dropdown box to allow a garment style to be selected. Sweatshirt was available but was not selected and is not reflected on her confirmation. We understand that errors can happen and for that reason, as stated in your order confirmation we give all customers the opportunity to review their orders for accuracy before orders are placed in line for production because all of our apparel items are printed custom for every order. Even after we stated multiple times prior to shipping that the order did not contain multiple sweatshirts she never stated that there was an error and she meant to select sweatshirt.

Love the design. Great quality and a soft and cozy material. Caught a great price, too!

AKA I AM DESIGN

R
Robin Lewis
I AM Sweatshirt